What is the thyroid gland?

The thyroid gland is an organ which is located in the central region of neck below Adam’s apple. It has two separate lobes roughly equal in size, with a bridge connecting the two- called isthmus. Thyroid gland produces hormones- thyroxin (T4) and triiodthyronine (T3). These are both secret in blood, which makes this gland an endocrine gland.

Thyroid and its hormones function as a regulator of metabolism rate of the body, and also affect things like neuron development in children and affect tissue growth and maturation (1).

Cancers of the Thyroid Gland

Thyroid cancer is the most common location of endocrine cancers. Around 3.11% of all new cancer cases in 2018 in the US will be thyroid cancer (2). That sums up to around 53 990 new cases only in the US, and much more in the world. Thyroid cancer affects women in nearly 3 out of 4 cases, and is more commonly diagnosed at 40s and early 50s (3). In 2015 it is estimated that around 765 547 are living with thyroid cancer solely in the US.

Not all thyroid tumours are malignant and life threatening however. Usually suspicion is raised when there is an enlargement of thyroid. This enlargement can be uniform, or it can appear in one or a few spots on the thyroid which are then called nodules. Sometimes thyroid nodules can be felt by fingers at examination, or seen with an ultrasound. Around 2 to 3 out of 20 are proven to be cancerous however.

Although, when talking about thyroid cancer, it is important to mention that there isn’t just one type and that prognosis and life expectancy is different for each. The main types of thyroid cancer are:

History of thyroid can be traced to as early as 2700 BC where there is mentioning of treating thyroid gland with seaweed by a  Chinese herbal medicine book. In 1500 AD Leonardo Da Vinci is the first person to draw and recognize thyroid gland, while its name originates from 1656 AD given by Thomas Wharton.

Even ancient civilizations have been aware that thyroid gland can be enlarged although it the reasons for it have been discovered much later. There were reports of thyroid cancer as early as 19th century. However it is not until 1959 that medullary cancer was identified as a distinct entity for the first time by J.B. Hazard, W.A. Hawk, and G. Crile. And later at 1965 first cases of thyroid cancer have been reported by E. D. Williams (5).

Documents of thyroid healing, and thyroid issues were recorded since ancient history. However, it is not until 20th century science development, that ways to diagnose and treat thyroid cancer have been perfected. First diagnostic procedures came in form of biopsy, which are known to be done as early as 961AD by Abul Kasim, a physician from Cordoba.

It took long since then for other techniques to be developed, but with discovery of X-ray and ultrasound and later digitalization that thyroid cancer diagnostics have been developed to the level at which they are today.

First known thyroid surgery was successfully reported in 1791 AD by Desault. However, Emile Theodore Kocher is considered father of thyroid surgery having practiced the procedure in 19th and 20th century. Another important surgeon that has contributed to thyroid surgery is Theodore Billroth a contemporary of Kocher. With beginning of the 20th century and discovery of radioactivity, radiotherapy has been developed as a treatment option for thyroid cancer. Treatment of thyroid with radioactive iodine date back to 1911 and in some thyroid cancers is still used to this day (6). 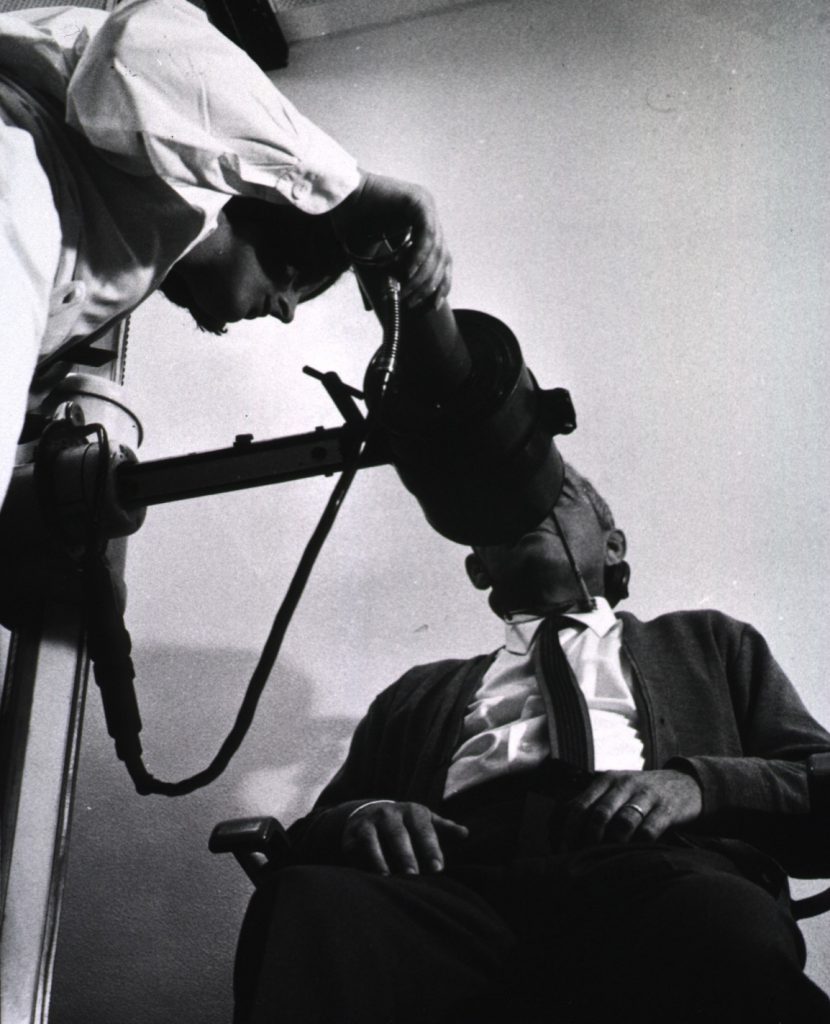 Radio-iodine test for thyroid in the Research Institute for Nuclear Medicine, Heidelberg

Thyroid cancer is usually detected when a person come to a doctor because of lump in a neck, or during a routine check-up. Sometimes when a person takes an ultrasound because of other problems in the neck area, cancer is discovered by chance.

Blood tests and regular ultrasounds for screening are not recommended if there is no increased risk of thyroid cancer, as for example from exposure to higher amount of radiation or positive family history of thyroid cancer (8).

However modern detection assumes using methods such as ultrasound, imaging methods like CT scans, PET scan, X-ray or a simple medical history taking. Despite that, actual diagnosis is made with surgical procedure called biopsy, where sample of thyroid tissue is taken.

These are always considered as stage IV when discovered, and are known as one of the most invasive and fast growing human cancers. 5-year relative survival rate is around 7% (9).

Therapy of thyroid cancer is complex subject which involves a team doctors with different medical specialties. Usually two or more treatment options which are:

Medical research is always moving forward in innovation and new treatments are developed for antibody treatment and different chemotherapy agents (11). 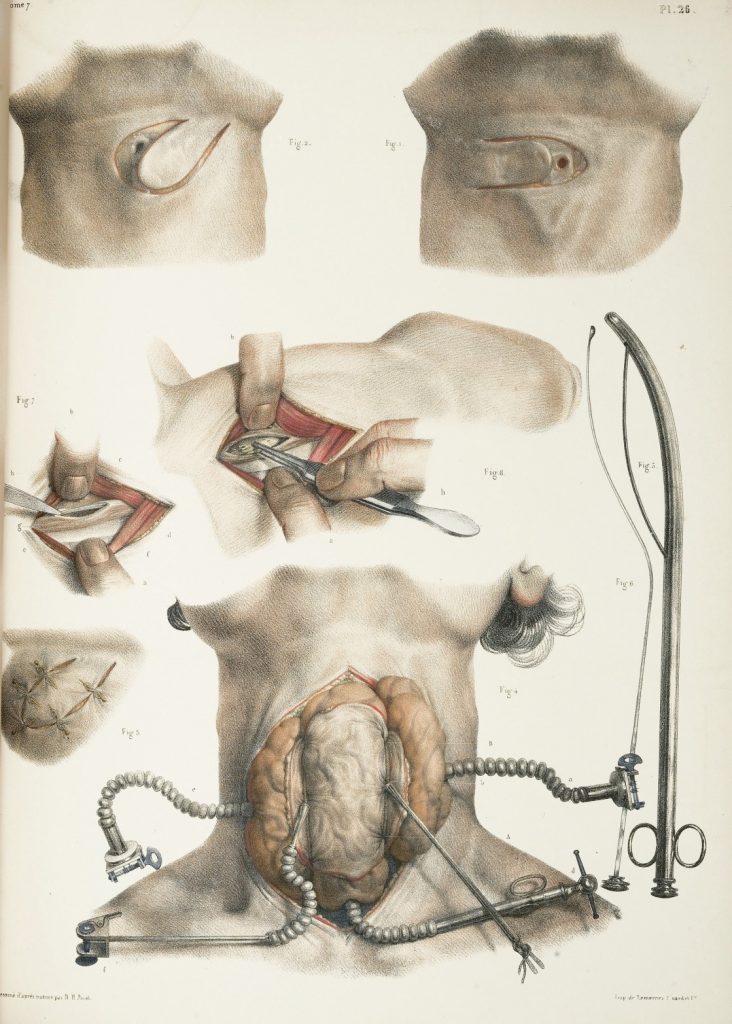 Various surgical procedures on the neck.

If you experience any of these symptoms you may have to check with your physician if thyroid cancer is present.

You can check your thyroid regularly by yourself. It is an easy procedure that requires you to feel your neck with fingertips.

With practice you can get quite good after a few regular tries. If you notice a lump during your checks, it is important to contact your physician. Small number of lumps is actually proven to be cancerous; nevertheless it is crucial to notify your doctor.

Important thing to avoid in order to lower the risk of developing thyroid cancer is to limit exposition to radiation during childhood. Also, it is important to incorporate iodine in diet if you live iodine deficient areas of the world. If there are hereditary conditions which incorporate thyroid cancer you can get tested for them and see if you have inherited the genes.

Apart from that, a general well balanced diet, not smoking and regular exercise are vital to improve general health a lower risks of cancer altogether (12).

Read more here on tests that can help you test your thyroid hormone level: https://www.alyzme.com/test-kit-reviews/thyroid-home-test/